Happy time zones folks. Life likes throwing in surprises and spanners and that has led to me not posting here. Writing wise, I have been much more successful.
Save for any words I write today I am on 17,926 words for the year. My target for the end of this month (March) for the year was 7,500 words. Whilst it is good over all that I am nearly 10.5k ahead, it is even better with Camp NaNoWriMo starting tomorrow. It is looking the next month is going to be very busy for me so having a buffer that I can use is going to be very helpful. The buffer is intended for the end of the year but if I have to use some now, so be it.
Majority of what I have written in the last three months has been my FMC’s first week of school, meeting classmates, teachers and first lessons. Seems a lot of words to spend on it but I am also aware that this draft is an absolute plantser mess! I have accepted that. I am focused on getting it written, not getting it right. The next draft is for tightening up and getting the big picture stuff sorted. I have also written some stuff that happens a few months later in story time. It connects with what I had written in December.
When I have not been writing, my mind has been on world building, new ideas and solving certain issues that had come to mind. Particularly, my thoughts have been about certain secrets and possible plans for the future. I may actually write some of the future stuff now, if only to get the ideas out of my head. My focus though is on completing this draft though.
Plans for the next few months is to keep writing, keep pushing for one completed draft of this story. Right now, I am reconsider certain word counts. A certain life surprise means the original goals I had set are now unlikely or pushing it too far. Take next month for example. I had planned on getting 10,000 words written during Camp. That goal has had to be revised down to 5k to accommodate it whilst also giving me the push to keep writing despite it. In May and June, I have set a target of 2,500 words each. These goals are based on what I wrote last year. All things considered, I am leaving them as is for now. They are attainable and any extra words will add to the buffer.
How is your writing going at the moment? Planning to enter Camp next month or in July? Had any problems or is everything going well? Do comment below.

These might seem harsh but accepting them does make things that bit easier I find. 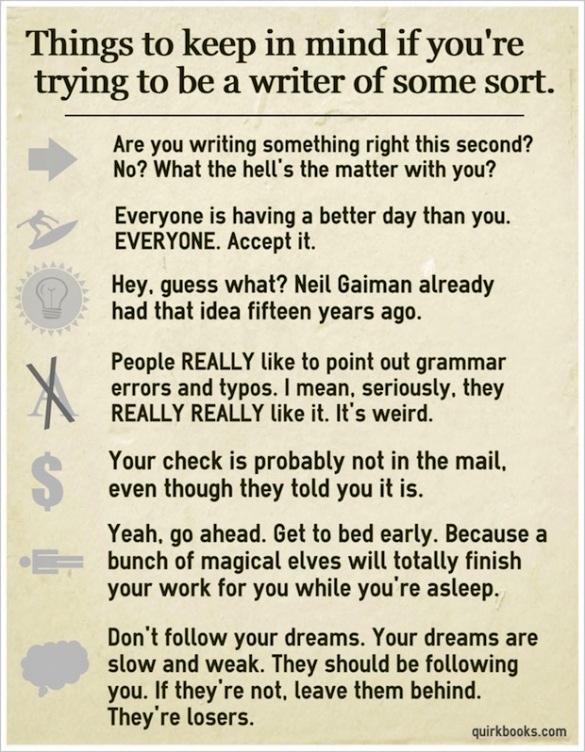 Have some laughs to start the week.

Ready for your Monday giggles fix?

Loving the Simon’s Cat in this week’s Monday Funnies. Go on! Have a giggle!

This made me smile!